Lecture, interview, parties, booths, public fun, safer sex pr and the big parade. The SM/leather/fetish community was an important and visible part of the diversity during Europride 2005 in Oslo. See the pictures here:

20.000 people walking in the Europride parade in Oslo Saturday June 25 with the open gay Major of Oslo, Erling Lae, (Leader of the City Council) in the front of the parade.

SLM Oslo (the Norwegian ECMC-club – Scandinavian Leather Men Oslo), Smia Oslo (the gay and lesbian group within LLH – The Norwegian national organization for gays and lesbians), and ReviseF65 (also a part of LLH), was an important and visible part of the Europride program, boots, the parade and the parties.

There were foreign visitors from all over the world, including several pervy SM/leathermen of course. 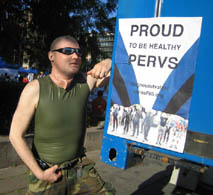 The theme of the leather/sm section in the europride parade was MASKS. So we dressed up in leather masks, rubber masks, army mask, and gas masks (several). And realistic (real face) masks as on the left picture. Titplay with his Derl Viktor mask at the ReviseF65 booth with our slogan for the week: “Proud to be healthy Pervs”.
This poster is made by ReviseF65 (Svein and Ole). The original picture is from CSD in Berlin 2004.

All the week the ReviseF65 committee had a booth at the Pride Village in front of the City Hall. We distributed 500 pamphlets in English about how to start the ReviseF65 work in different countries, and also gave people a new brochure about Safer Sex produced this winter for Norwegian gay SM/leathermen. Smia and ReviseF65 have been a co-authors of that very important brochure, which is published by the Norwegian Hiv and Aids organization (Helseutvalget for homofile), in cooperation with the gay leatherclub SLM-Oslo and officially supported by the Norwegian heath authorities.

The ReviseF65 committee also got in contact with some candidates to the Norwegian Parliament this year. And the reactions were positive this far.

The MC people in the beginning of the leather section.

As always, it is important to show other lesbian/gay people, the press/tv/media, and the rest of the society, that leather and SM are and important part, both of the homosexual community, and the society in general!

Several people and journalists have asked me the last days:
– Has there been any positive changes for the SM population in Norway the last 10 years. And my answer is :YES. It has become somewhat more open attitude. But, as with the experience of the gay movement, I will estimate that, as more SM people get out of the closet, for a period, there can be, more discrimination against members of our group.

Svein, masked as Derl Viktor, together with a rubberfriend in black. The party was a 10 years anniversary for SMIA. I held a speech about all the fun we have had at our club, Smia’s history, and our work to stop hiv and aids. 38 people attended, and the Gay online magazine GAYSIR, interviewed Svein, Ole and Odd from the ReviseF65 committee. Read the article online at http://www.gaysir.no/artikkel.cfm?CID=10627 (sorry, only in Norwegian, but there are two pics to look at). Entertainment by the LLH group CabaRosa.

Leather people and the gay movement

Leatherpeople have played a role in the modern gay rights movement from the very beginning in Norway and abroad.

As the leader of the ReviseF65 group and Gay Person of honour in Norway 2003, Svein was invited to hold a lecture at the University of Oslo Thursday June 23, about the subject “SM – health or disease?”. Attendants were 90 gay and lesbian christians from all over Europe (”European Forum for Christian Gay and Lesbian groups”). We got in contact with persons from a group of people working to revise the F65 chapter in France. We are looking very much forward to keep in contact with them also!

Read more about the lecture, and see the pictures at http://www.reviseF65.org/europrideoslolecture.html