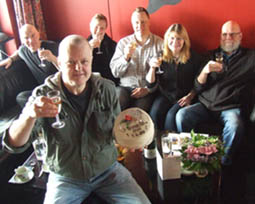 Fetish and SM no longer diseases in Norway

The Norwegian Directorate of Health announced February 1, 2010, that the diagnoses of Fetishism, Fetishistic transvestism, Sadomasochism, Multiple disorders of sexual preference and dual-role transvestism, have been repealed from Norway’s official list of medical diagnoses by 1.02.10.

What follows is translated to English from the Norwegian Directorate of
Health’s website February 1st 2010 by psychologist Odd Reiersøl (URL to the websites updated November 27, 2011 by the Directorate of Health):

[01.02.2010: Bente Steinnes] The Norwegian Directorate of Health has decided that certain diagnostic codes are now invalid in Norway, thus changing the Norwegian version of the international diagnoses register (ICD-10).

– In our opinion there is no basis, neither in today’s societal norms nor in professional health thinking, to classify these diagnostic groups as disease, says head of the Health Directorate Bjørn-Inge Larsen (picture). By excluding the use of these codes in Norway the Directorate wishes to contribute to the weakening of a general opinion that certain sexual preferences, sexual identities and gender expressions may be seen as states of illness.
We want to avoid stigmatizing

The Directorate of Health gives considerable emphasis to the fact that several interest organizations as well as health professionals from various environments have for a long time presented knowledge that these diagnoses in and of themselves, are experienced by many people as offensive and that they contribute to stigmatizing both groups and individuals.

The diagnoses mentioned are outdated and not at the level of the scientific standards that otherwise characterizes the international diagnostic manual (ICD-10).

There have been no essential changes to these diagnoses for over one hundred years. They came into being as a result of theories based on the current knowledge and viewpoints on human sexuality in society of those long gone days. At best these diagnoses, are completely superfluous. At worst they are stigmatizing minority groups in society.

These diagnoses are not useful to the health care system

The main objective of the classification of illnesses and health problems is to enable clear and comparable statistics describing the health care assistance to patients in contact with the health care system. The diagnoses which are now deleted are very seldom reported, and are therefore of minor relevance as a basis for the contents of the Norwegian Patience Register.

The decision applies as of February 1st 2010, and the code register will be updated as soon as practically possible.

By making this revision Norway has now joined Denmark and Sweden which made similar revisions in 1995 and 2009 respectively. The World Health Organization, WHO, is currently working on a new version of the diagnostic manual: ICD-11. As all the Scandinavian countries have now abolished the diagnoses for use at the respective national levels, this will be a significant professional and health political signal to WHO in the compilation process of the ICD-11.

The diagnoses of Transsexualism remain unchanged

The diagnoses that cover transsexualism among adults and children (F64.0 and F64.2) are not affected by this revision. Concrete treatment offers are available to these groups. In 2010 the Directorate of Health shall investigate the treatment options which are available to transsexuals and transpersons, and evaluate possible improvements. In that connection it will be reasonable to evaluate the diagnostic criteria and how they are being used.