This is the conclusion from a Belgian survey published in The Journal of Sexual Medicine in 2017.

The cross-sectional survey was carried out from February 2017 to March 2017. A digital invitation for participation in the survey was e-mailed to 8,041 subjects by iVox (Leuven, Belgium), a market research and polling agency with access to a panel of 150,000 Belgian citizens representative of the general population. Of the 8,041 invitees, 2,764 participants opened the survey (34.4% responders) of which 1,027 (37.2%) completed it, leaving 1,737 non-completers and 5,277 non-responders. 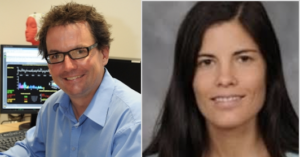 The two researchers Christian C. Joyal, Ph.D. and Julie Carpentier, Ph.D. (picture) at Université du Quebec à Trois-Rivières, Departement de Psychologie, in 2016 published the study “The Prevalence of Paraphilic Interests and Behaviors in the General Population: A Provincial Survey” in The Journal of Sex Research.

Here is some of the results concerning consensual ”paraphilias”:

Joyal and Carpentier found that 46.3% of the respondants (N=1040) acknowledged a desire for (wished to realize) some sort of fetishism and 22,8% had experienced fetishism “sometimes or often”.

23,8% of the respondants acknowledged a desire masochism and 13,7% had experienced masochism sometimes or often.

7,1% of the respondants acknowledged a desire for sexual sadism and 3,2% had experienced sadism sometimes or often.

The result also supports the clinical impressions of Khar (2008) and Brenot (2012) that individuals (especially women) with masochistic/submissive) sexual proclivities are the most satisfied, driven, and active sexually.

Joyal concluded in Eurekalert news that: “We have reasons to believe that this study’s results which are based on Quebec’s population can be applied to the population of North America and Europe as well”.

Respondents were selected and interviewed by three female professional interviewers from an independent private firm, the Bureau of Professional Interviewers (http://www. bip-sondage.com), between August 9 and September 8, 2014. Data were obtained from 1,040 adults ages 18 to 64 years old who matched as closely as possible the corresponding population of the province of Quebec.

The American Kinsey Institute estimate that 5-10 percent of the population practise some kind of sadomasochism.
“Researchers estimate that 5-10 percent of the U.S. population engages in sadomasochism for sexual pleasure on at least an occasional basis, with most incidents being either mild or stage activities involving no real pain or violence.”
The 1990 Kinsey Institute New Report on Sex (June M. Reinisch, Ph.D. with Ruth Beasley, M.L.S., New York: St. Martin’s Press, pp. 162-163).

According to the world’s largest ever survey of sexual attitudes and behaviour, undertaken by Durex in 2004, with more than 350,000 respondents from 41 countries, 19 per cent practise spanking, which probably is the most common SM activity. 22% indulge in blindfolding or handcuffing, which we presumably can call “bondage”. 15 per cent enjoy various kind of role play and 13 per cent appreciate “dressing up” or fetishism.

See also: How many people engage in SM activities? A handful studies done to determine the percentage of the population engaging in SM activities. By Charles Moser, Ph.D., M.D. and Susan Wright, spokesperson for NCSF, National Coalition for Sexual Freedom.