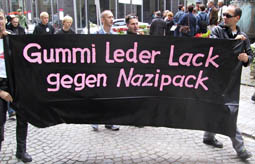 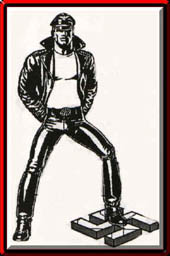 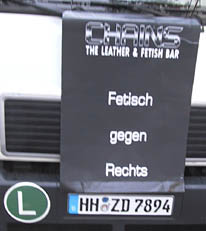 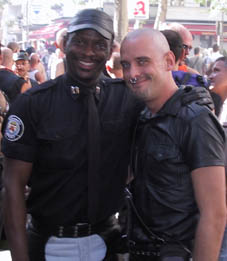 (Sorry: All the photo links on this page is removed because of dead links)

EATHERMEN FIGHTING HIV
Gay leathermen fighting hiv and aids during the Folsom Europe street party in Berlin September 4, 2004.
(The flyer on the picture is manipulated to be possible to read)

Folsom Europe 2004
Inspired by the Folsom Street Fair in San Francisco during twenty years, Up your Alley/ Dore Alley (San Francisco) and Folsom Fair North (Toronto), Folsom Europe e.V. for the first time invited the gay and straight Leather/SM/Fetish community to celebrate it self during three days in Berlin, September 3-5, 2004. It was a big success as you can see from the picture galleries.

Folsom Europe were supported by the City of Berlin, the Berlin Police, the Industrial Chamber of Commerce and Industry in Berlin and the Berlin Tourism Office.

The Folsom Europe Street Fair have three goals: making stronger within the Leather-Fetish scene, steps in the open public to reduce pre-judgements, as well as the support of community associations and organizations in Europe, which support and care for HIV-Positive people and those with AIDS. All the money raised will be used for those projects.

For 2004 the kindergarten in the Fuggerstrasse and the AIDS emergency found in Poland will be helped. The kindergarten is a private initiative which looks after HIV infected and AIDS positive children.

People of all colors

Svein and Ole from ReviseF65