SM and Fetishism are positive and healthful parts of peoples lives. To accept one’s SM orientation, preference, sexuality and love is essential for a healthy life, identity and decisive for the ability to protect oneself against sexually transmitted diseases. 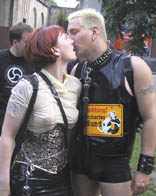 SM is love – not a disease
Europride in Cologne 2002. Photo by Svein Skeid, Smia-Oslo.

Love and respect are basic parts of SM relationships. Stigmatizing minorities by diagnosing their sexual orientation is on the contrary as disrespectful as discriminating people because of their race, ethnicity or religion.

For many years homosexuality has been abolished as a disease by the World Health Organization (WHO). But did you know that leather men and SM dykes are still not reported off the sick list? SM sex is even now considered an illness by the WHO, despite the fact that US psychiatrists removed it from their DSM manual eight years ago.

In connection with Europride 2002 the ICD project asks for testimony, quoted reference and supporting evidence from psychiatrists, psychologists, sexologists and reseachers of human sexuality in order to remove Fetishism, Sadomasochism and Transvestic Fetishism as paraphilic diagnoses from ICD, The International Classification of Diseases published by the World Health Organization (WHO).

The initiative of individuals is always to be welcomed, but even more efficient would be the formation of local and national working groups which are able to approach to the professionals in question.

Women suffer the most harassment
Branding perfectly healthy sexuality is an unacceptable insult to the dignity and integrity of the people who enjoy these safe, sane and consensual practices. Stigmatizing minorities by diagnosing their sexual orientation is as disrespectful as discriminating people because of their race, ethnicity or religion.

Even though the paraphilias in question are very rarely used, the stigma of being diagnosed make harassment of sexual minorities legitimate. The U.S. Leather Leadership Conference documents that between one-third and one-half of the leather/SM population suffer discrimination, violence or persecution because of their sexual orientation and identity. As with other assaults, women suffer the most harassment, losing their job or even their children, because of their SM love, lifestyle and self-expression.

Because lesbians also experience physical attacks – approximately one out of every four SM dykes consider or actually commit suicide because of severe persecution by their fellow-sisters – the U.S. National Organization for Women, NOW in 1999 erased previous censure of sadomasochism from their “Delineation of Lesbian Rights” policy.

The United Nations High Commissioner for Human Rights in 2001 became involved in the question of such abuses, and has registered individual cases of violence against SM practitioners worldwide.

Healthy leather people
In recent years as more research has been published, also the mental health and medical communities have begun to accept that SM is a safe and legitimate pursuit.

Sadomasochism is considered to be a healthy form of sexual expression as long as it does not impair the daily functioning of the subject, according to the latest 1994 edition of American Psychiatric Association Diagnostic & Statistic Manual (DSM-IV).

Denmark, as the first European country, totally removed the diagnoses of Sadomasochism from their national version of ICD in 1995 because this non-violent and healthy activity was considered as a private matter by the Health Authority.

In the rest of Europe and the world, fetishists, SM’ers and transvestites are still considered among the mentally ill by the ICD psychiatric authorities.