“The Gay Leatherman” – a SM Documentary 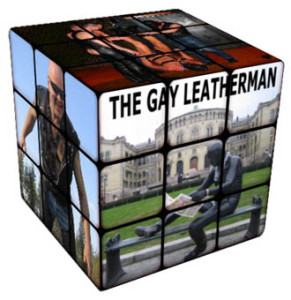 The short film “The Gay Leather man” (“Lærhomsen”) with participants from SMia, SLM and Revise F65, was shown for the first time June 23, 2006 in Oslo. The 25 minute long documentary, which in a humorous way demystifies the most common prejudices against fetishism and sadomasochism, has later been shown for several educational purposes in addition to film festivals including Lillehammer and Volda Norway, Gay Days in Oslo, Fulda Germany, Stockholm, Cleveland, San Francisco, Kiel Germany, and several times at CineKink New York. English subtitles.

The film ”The Gay Leatherman” (Lærhomsen) from 2006 has already become a classic. The 25 minutes long documentary by Lars Joakim Ringom demystifies in a humorous way the most common prejudices against fetishism and sadomasochism.

A journalist and sexologist from the Norwegian newspaper Dagbladet, wrote:

“The Gay Leatherman is a beatiful, warm, humorous and touching short film. It is about how to live as a gay leatherman, and how sadomasochism can be practised in a safe, sane and consensual way.”

Svein Skeid, a Norwegian SM activist, shows us public reactions to rubber fetishism in front of central institutions of power in Oslo, like the Parliament building and the Royal Castle.

The film is interesting for everybody into those interests never the less if you are gay, bi or straight. It can also be be suitable for educational purposes, e.g. health workers, and may be, public tv viewing.

The non-commersial film, with non-professional partisipants, is subtitled into English.

52 pictures from The Gay Leatherman:

11 pictures from The Gay Leatherman:
http://web.mac.com/olavtrygg/iWeb/Parade07/Laerhomsen.html