2002-. Building up a professional basis for the reform on reviseF65.org. 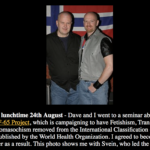 2006 – The professional basis for the Revise F65 project published in The Journal of Homosexuality and in the book Sadomasochism: Powerful Pleasures.

2007 – The WHO coordinator Dr. T. Bedirhan Ustun invites Revise F65 to cooperate about the forthcoming ICD-11.

2011 – Revise F65 delivers the second report to WHO’s Working Group documenting that the diagnoses in question are outdated, non-scientific and stigmatizing.